Fantastic magic shows for your party in Allen 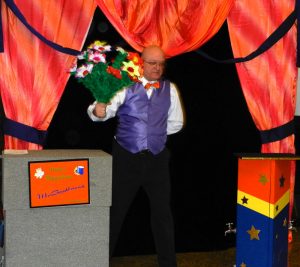 Kids love magic! And MrGoodfriend gives kids the magic they love!
MrGoodfriend is professional. On time and ready to perform. MrGoodfriend (Derrel Allen) has been vetted (background checked) by Children’s Advocacy Center of Dallas, WATCH D.O.G.S. (Dads of Great Students) & the Allen ISD.
MrGoodfriend is grateful you are giving this opportunity. And your kids will be grateful for having such a great birthday party!

Sometimes, there is a lot of hectic motion surrounding a kid’s birthday party. Wouldn’t it be nice to be able to take a deep breath and focus on the guests, the food and decorations, and not have to worry about how to keep this group of kids entertained?

“We hired MrGoodfriend to entertain for our 3 son’s party. We didn’t really know what to expect. He was professional, set up quickly, and put on a really good show. We had our youngest son’s friends, about 7-10 years old and our twin boys friends who were 15. I was amazed that he was able to entertain both groups. Even the adults watched the show.”

“Our Blue and Gold Banquet was a tremendous success because of the great show MrGoodfriend put on. He got everyone involved and made sure we all had fun, even the Scout leaders.”
— Eric T., Arlington, TX

“MrGoodfriend is really great with the kids.”

What are you waiting for? Get a birthday party magic show with Dallas magician MrGoodfriend now!